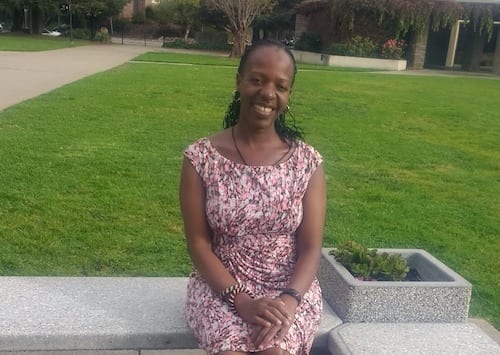 Vivian Nabuule trained as a CPE student in our summer 2017 intensive. Listen to her experience of CPE at SF Night Ministry. 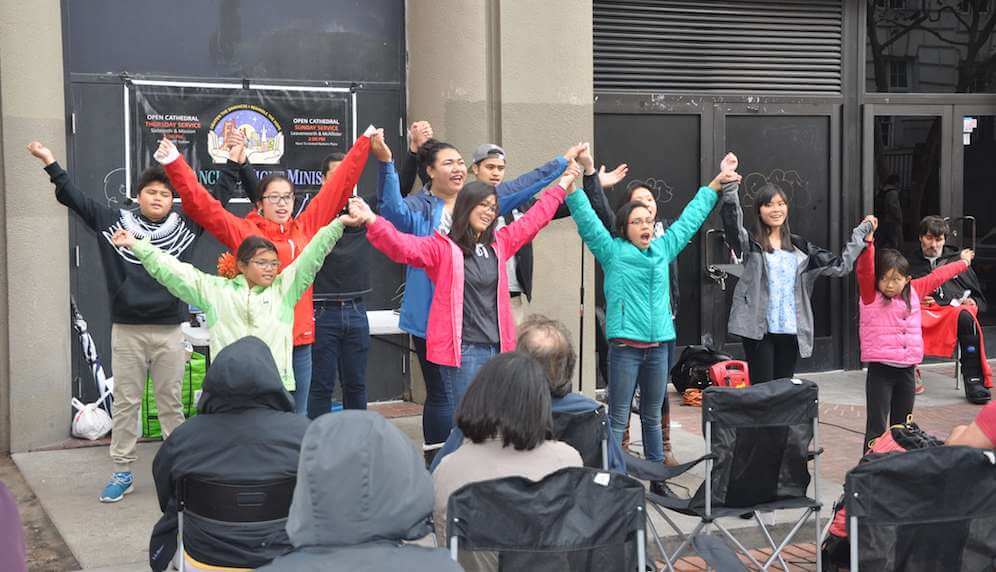 by Amy Nachman, The Episcopal Church of St. Mary the Virgin, San Francisco

The gathering grew slowly with a few people milling about. As it got closer to 2 p.m., the crowd increased; once the service began there were probably 45 people standing around the temporary altar set with flowers, a Bible, and a cross. Emotions reached a high point with shouts of hallelujah during the sermon. Communion consisted of a baguette — broken off and handed to each person — and grape juice in individual paper cups. After the service, a free bag lunch with sandwiches prepared by St. Mary’s volunteers and a beverage were distributed.

It was an eclectic gathering, for certain. One man said he’d been about to make his drug connection that morning, but he dropped his phone in the water, and it stopped working, so he attended church instead. After the service, he repeatedly shouted, “Jimmie Rae! Used to go to church every Sunday with his mama! This is where I belong!” He identified with the liturgical elements of the service, and began to smile as it sent him back to a happier time in Nashville. He relished being back in church.

Another man kept staring at my Dalmatian. I started talking to him, and when I asked him how he was, he replied, “I am okay. I am going to Walden House next week to deal with a few addictions. But whenever I think of this church service, I’ll remember your dog.”

Sometimes, at the end of Open Cathedral services, people come up to the altar and sing Amazing Grace. The service can bring ebullience to a crowd of people who are often dealing with such intense difficulties and travails in their lives. Attending Open Cathedral is simply a beautiful and inspirational experience.

We at St. Mary’s are involved as sandwich providers every three months on the third Sunday of the month. The Rev. Nancy Bryan and I have called other Episcopal churches to invite their participation.

Joanne Chadwick served as Volunteer Coordinator for Night Ministry at the very beginning of the organization, 50 years ago and continues to volunteer, currently Co-Chairing our 50th Anniversary Committee. 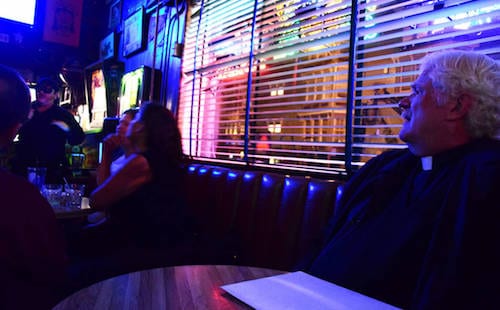 On the Streets of the Tenderloin: ‘A Light In an Unlit World.’
by Natalie Yemenidjian (KQED)
June 29, 2016

San Francisco Night Minister Lyle Beckman is sitting across from me at a saloon on Mission Street in San Francisco’s Bernal Heights. He sips on a club soda while we wait for drag king Kit Tapata to finish hosting the bar’s trivia night.

Tapata, who’s dressed like Westley from The Princess Bride points out Beckman to the crowd.

“Behave,” Tapata orders. “There’s a father in the house.”

As the bar’s attention turns his way, a woman sitting nearby draws closer to Beckman and he leans in. They talk about her late husband, a topic that punctuates their conversation about baseball, the differences between the West Coast and East Coast, and her past as a devout Catholic.

“Oftentimes it’s under the influence of alcohol that I hear the stories of people that really want to share,” Beckman says.

The Bay Area is one of the least churchgoing metro regions in the United States, according to a survey by the Barna Group, with 48 percent reporting they don’t attend church anymore and 14 percent saying they’ve never gone to church at all.

But Beckman, an ordained Lutheran minister, says church and religion aren’t about regular attendance at service.

The S.F. Night Ministry holds what it calls open cathedrals — outdoor services. Beckman says some of the people most in need of comfort are those who cannot stand in a room or be silent for an hour.

“The real work of the church isn’t about what comes out of the archbishop’s office,” Beckman says. “It’s about what the church does feeding the hungry, sheltering the homeless, giving access to social services.”

In the Tenderloin, Beckman has noticed that at the beginning of each month, when folks get their Social Security or other assistance payments, there are fewer people on the streets than usual. But he is sure that he’s needed anyway. While other institutions may provide shelter, food and services, Beckman and the other night ministers may be out in the neighborhood all night, listening to, hugging and praying with the homeless and most vulnerable residents.

“We could change this,” Beckman says, pointing down Turk Street. “But everybody waits for the city to do something. If we put our heads and hearts together, we can do something for these people sleeping on the streets.”

Homelessness is part of the landscape, with a 2015 city count showing that 60 percent of those living without shelter in the city were found in the Tenderloin and South of Market.

Beckman ponders what change will bring to the neighborhood.

“I wonder often, what’s the future of the Tenderloin? Will it lose its character?” said Beckman.

There is no shortage of character in front of Aunt Charlie’s Lounge, a gay bar on Turk. Outside on the sidewalk, a local named Tim Haley has set up a grill and the aroma of barbecue permeates the air. He sells sausage links, ribs, chicken and other favorites to bar patrons and his Tenderloin regulars.

He has a purple aura, doesn’t he?” a woman asks, referring to Haley.

Beckman stops to check out the aura and waves his hands in the air as if to outline the purple glow.

The woman looks at Beckman for a moment, realizing he’s a man of the cloth. She asks him if people who kill themselves go to hell. She explains her brother had taken his own life. Beckman softly explains that his God is one of forgiveness and compassion.

“No one is going to hell tonight,” he says.

Tim Haley says he’s a recovering addict who used to be homeless.

“I fell a long way back,” Haley says. He used to work at an apartment building around the corner. When they fired everyone, he went on a downward spiral, but found his way back.

“I thought I never would get out of that stuff,” he says.

Beckman has a striking presence as he walks through the Tenderloin. While most of us, conditioned by “mean world syndrome” and a thousand other anxieties, might put on some kind of psychic armor, Beckman seems unguarded in his exchanges with people on the street. He’s affectionate, but not overbearing. His 6-foot-4-inch frame, draped in black, is somehow more comforting than intimidating.

As we walk down Turk Street, there is no one that Beckman will not stop for.

A man calls out to him from his seat on the pavement: “You’re the light in this unlit world. Thanks for being out here.